connect with NYBC on social media

Connect with us on social media for updates on consulting tools, entrepreneurship and business trends.

Around the World, a large number of African Women are involved in entrepreneurship. In Ethiopia women played an important role in stimulating economic growth, political, technological and leadership evolution. Empress Taitu Bitul, who was the wife of Empire Menilik II was one of the key leader in Ethiopia. Taitu's original and durable work of politics, economics, cultural, social an military have added to the definition and implementation of a nation agenda. The site of Addis Ababa was chosen by her and the city was founded in 1886 by Emperor Menilik II. She named Addis Ababa ( New Flower) as a permanent seat of the central government. The founding of Addis Ababa as a new capital city allowed people to migrate and settle in the new town from all regions of the country. She contributed land and building materials to several monasteries. She also supported the Ethiopian church in Jersulam, Israel. She has launched and encouraged both local and international tourism by opening the first modern hotel in Ethiopia by her name Taitu Hotel and she becomes it's first manager in 1906. Taitu hotel provides guests a place to dine and rest. The beauty and elegance makes the hotel a perfect place of business travelers and tourists. In the attempt to modernize the Ethiopian economy and to counter the heavy handed ness of the Abyssinia Bank, a foreign firm, Taitu started a domestic financial institution where indebted traders were able to obtain loans and continue commerce. She set up the first wool factory in collaboration with experts from Turkey and India thereby paving the way of possible Ethiopian Industrial Age. Taitu also used local raw materials to manufacture candles. Church costumes were designed and made by tailors in an organized fashion. On the religious font, Taitu established the historic Menbere Tsehay Entoto Mariam Church, which is the a choice for tourist destination in Ethiopia. Her leadership contributed to the process of nation building and modernization at the beginning of 20th century. Therefore Empress Taitu Bitul played a great role in Ethiopia political, economic, social and cultural role and her legacy continues to inspire Young Ethiopian Women entrepreneurs. Now a days internet and social media have created the " global village" (Kofi Annan) and today creativity has become more important and entrepreneurship are what is creating wealth and prosperity long term, it's empowering people who find solutions who make things better and who feel inspired to create. The change in ' transaction costs' has made it possible that women entrepreneurs can put their products online to market and sale and do what previously only big companies can do. "Women are becoming very much empowered and involved in business, it's must to get involved in economic development." Zinabua Hailu, Business owner in Addis Ababa. Research indicates that investments in women -owned business offer one of the " highest return opportunities available in emerging markets" according to World Bank economist Francesco Strobbe and Salman Alibhai. " Because female entrepreneurs tend to hire other women, among whom unemployment is more common; their businesses " can be a key driver in reducing high overall unemployment rates," I used my leadership skill by becoming Young African Leaders initiative Network member and I have earned more than thirteen certificate By taking online course and on March 4, 2017 I organized YALI Learns Renewable Energy Event at The American Center at the National Archives and Library Agency in Addis Ababa, Ethiopia. To make awareness about Renewable Energy, the resources and best practices to make it sustainable, understanding the economic and community impacts of renewable energy, explaining how we can make an impact by changing our energy demand and become more efficient consumers. In conclusion Women's are country President, Judges, Scientists, Astronomers, CEO, Political Leaders, Designers, Doctors, Pilots, Entrepreneurs. Therefore, their impact of evolution in world social, political, economical and technological growth is not questionable. "Courage allows the successful woman to fail and learns powerful lessons from the failure so that in the end, she didn't fail at all. " Maya Angelou "Each time a woman stands up for herself, without knowing it possibly, without claiming it. She stands up for All Women." Maya Angelou.

Your NYBC Team
Posted by Unknown at 11:09 AM No comments: 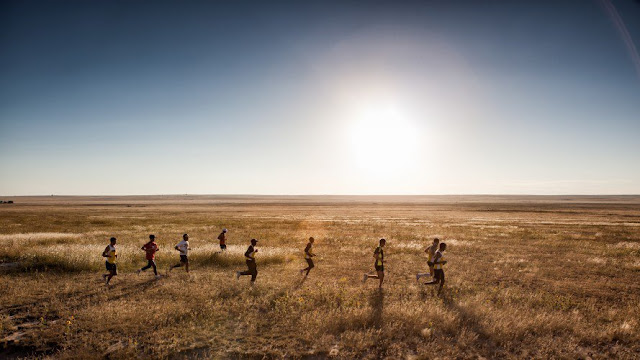 Inspired to run - The persistence hunt & what we can learn from it for modern life.

The animal will always be faster than you but you can still outrun it by being more persistent. Probably the most fascinating of tribal hunting techniques - humans over thousands and of years developed the upright walk and then the ability to run.

In our modern age with mas transport and fast food, elevators and hardly enough time for the gym and exercise it almost sounds surreal when we hear of people who run to eat, who hunt in order to survive and basically still hunt with their feet.

The Pronghorn antelope can run up to 35 mph for 4miles, it will outrun any hunter but persistence hunters follow the tracks continuously and run after the animal for mile after mile until the animal is totally exhausted. The animal overheats and is literally outrun by a long distance runner.

What does this tell us for our modern life, what is fascinating and meaningful for us? Don't we feel outrun as entrepreneurs, employees, living in busy cities and modern times? Maybe we can get some inspiration that our persistence can achieve anything. Like the small fragile drop of water that persistent enough over time will go through stone.

It works, the human will and persistence can achieve about anything - from the first runner after the Greek battle of Marathon to today's mass sport and Maraython phenomena to its roots in African tribal persistence hunting - people inspire us to believe, to move forward despite all odds, despite all challenge, to make progress one step at a time and to just never give up.

Keep moving forward, find something you want to be persistence about and have a powerful week everybody!

PS: A great modern test of persistence hunting and more information in this inspiring article http://www.outsideonline.com/1996281/does-persistence-hunting-really-work

Posted by Unknown at 6:46 AM No comments:

Save the date for the UN Career Program, 10 packed days of action! July 22-31st. If interested/sneak preview at: info@newyorkbusinessconsultants.com
Posted by Unknown at 11:27 PM No comments:

Save the date for the UN Career Program, 10 packed days of action! July 22-31st. If interested/sneak preview at: info@newyorkbusinessconsultants.com
Posted by Unknown at 11:27 PM No comments: